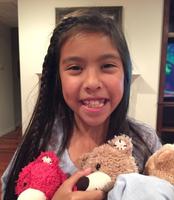 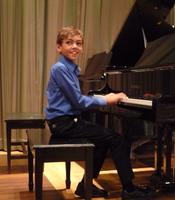 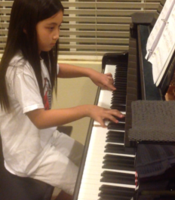 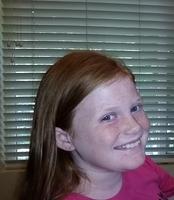 ​Congratulations to Jessie Weigold, our June “Student of the Month”!  Jessie is 8 years old and will be entering 3rd grade next year. She has been taking piano lessons for 1 1/2 years. This week, Jessie performed in her second piano recital at the Temecula United Methodist Church. She played two pieces, Dragon Hunt and Spanish Caballero!

Jessie is a great student  and I love teaching her.  She always comes prepared with a positive attitude and ready to learn.  She's going to go far in the next couple years!

Congratulations to Gia Nanci, our April “Student of the Month”!  Gia is 9 years old and in 4th grade. She has been taking piano lessons twice per week for the last several years. This week, Gia received a superior rating and earned herself a gold medal at the TVMTA Festival Auditions. In the past years, Gia has also participated in many recitals, the CAPMT Evaluations, and the  CAPMT Auditions.

Gia also enjoys swimming and swims on the team "Elite" several times a week. She also participates in the Choir and is a member of the ASB at school. She has 2 cats; 1 is a Siamese named Rico, and the other is a Blue Scottish Fold named Auggie. You can find her enjoying many of her weekends by the river, where she enjoys swimming and boating with her family.

Gia is a great student  and has a great sense of humor making classes fun!

​Congratulations to Sophia Miles! Sophia is in 5th grade and 10 years old. She has participated in several recitals.

This year, Sophia will be participating in the TVMTA Festival Auditions in April as well as in the Royal Conservatory Music Development Program for the first time in May. She is one of our first students to be almost completely prepared for this event, and I'm very proud of the progress she has made this year! Sophia also enjoys sports, and in particular, she likes tether ball and volleyball.

Sophia is a great student who consistently comes to lessons well prepared, gives her best, and is a joy to work with!

Congratulations  to Isabella Medici!  Isabella is in 5th grade and 9 years old with a fun and happy disposition which make lessons fun!

This month, Isabella performed the Sonatina in G  by Albert Biehl at her school talent show. I love that she has taken her music to share with her friends at school!

Isabella is currently preparing for the Music Development Assessments through the Royal Conservatory of Music. She has participated in CAPMT Auditions, the TVMTA Music Festival (earning a gold medal), and many recitals.

Isabella also is a dedicated art student. Last year she won  2nd place in the annual  "Music-in-Art" contest for her picture "Singing in the Rainbow". Click to view.

Isabella is off to a great start this year! Congratulations!

Congratulations  to Jonathan Steele! Jonathan is 13 years old and started his piano studies here 5 1/2 years ago. He has participated in many Recitals, the TVMTA Festival Auditions, the Music Development Program, and Guild.  He is such a fun student, and loves his music!

Jonathan is also active is  band at school where he plays clarinet and is a member of the track team.

​Last month, Jonathan participated in the the CAPMT Piano & Ensemble Auditions and earned himself a perfect score (5 out of 5).

I am so happy to be his teacher and I know that with Jonathan's love of music, wherever life takes him, music will have a special place!

Congratulations goes to two  students this month! Daniel & Gina Namkung have made wonderful progress this year and can always be counted upon to come fully prepared for lessons!

These two young students are 7 years old.  In the last year they have participated (and done well!) in the TVMTA Festival Auditions, the Music Development Program, the Holiday Recital, and the Spring Awards Recital. Daniel Namkung also participated in the 2014 TVMTA Young Artist Piano Competition. 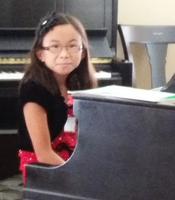 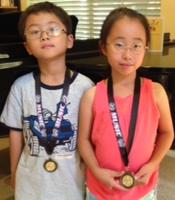